I know it’s been ages…but since I’m trying to study and I   couldn’t decide when to put up some of the stuff I’ve been putting off putting up. Anyway, it was Black History Month (BHM) in October and I worked with the Liverpool Guild of Students organising and participating in some events and such.

(slightly edited to make sense as a post, as opposed to a speech…please pardon any spelling errors)

My Name is Oyindamola Johnson, you can call me Oyin & I just want to say a few words on Multiculturalism, especially in the context of expressing many cultures in a conservative society. Proof of multiculturalism is that more than half of the people reading this post cannot pronounce my first name no matter how hard you try and the rest of you have 1st names that most people in this country (UK) can’t pronounce properly. It’s the same reason that you can mostly still tell someone is ‘foreign’ despite their excellent command of English. That phenomenon is called Phonological Interference, but that’s not something I wish to go into details on now (don’t hesitate to google it, Google Is Your Friend). So we’ve all heard that ‘variety is the spice of life’…I want to look at those times when the spice in question is sour, a spice like Vinegar.

Multiculturalism becomes a relevant concept in communities which, like this one, comprise multiple cultures (as the name implies). The term multiculturalism, can be construed either descriptively ( referring to cultural diversity in a general sense of the make-up of society) or normatively. Kevin Bloor in his ‘Definitive Guide to Political Ideologies‘ said the major normative element of multiculturalism was a society “at ease with the rich tapestry of human life and the desire amongst people to express their own identity in the manner they see fit. I think the main point of conflict here is “the manner they see fit“. People express themselves through religion, dressing, culture, art, poetry, the list goes on. However, what happens when the manner you see fit doesn’t fit the manner that I see fit {I promise that’s an actual sentence, I’m not just biased to the word ‘fit’}

Let me illustrate with a story:

Ugochi moved to London from Nigeria last year. She started at the University of Liverpool in September. She studies Economics, and as is almost always the case, 70% of her friends are Nigerian like she is, 20% are from other African countries, 6% are Caribbean, 3% are Asian & 1% are everything else. By 1% I’m referring to her one friend called Valeria who was born to ambassador parents in in Russia, grew up in Scotland but is half French and half American. So , after a long confusing MicroEconomics lecture today, Ugo introduces Valeria to her Nigeria friends. They smile and say “Hello, How Are You?” ( most of it sounded more like “Ello, Aawa you?” and “Helor, How A Yawwu?”} . As they all walk back home, most of Ugo’s friends begin conversing in their local dialects, Valeria is struggling to keep up. Obviously, she is more than relieved when the time comes for everyone to go their separate ways at the Central Hub. She goes home a bit puzzled, feeling awkward and out of place. Those people seemed nice…but she couldn’t see how they could possibly ever be friends.

Right, so next week there’s a Pub Quiz at the Ken Saro Wiwa Bar. Valeria invites Ugochi to come along and meet some of her friends. As she arrives, most of them are Scottish or English,one of them, distinctively Australian, greets Ugo with a smile saying Goodday Mate (sounded more like “Good Eye Might”). True to the spirit of a bar, everyone starts drinking, cracking jokes and singing old folk songs….that’s everyone, except Ugo. Ugo is an Ibo Muslim (almost as rare to find as a chimera), and its against her religion to drink alcohol, also she’s just moved here so she doesn’t get the jokes or know the old folk songs. So Ugo goes home a bit puzzled, feeling awkward and out of place. Those people seemed nice…but she couldn’t see how they could possibly ever be friends.

My questions to you are: Who is wrong? Is anybody wrong? Is there anything that should have been done to promote inclusivity that wasn’t done? Who should suppress their own culture to include the other’s? Is it the majority or the minority? Should anyone be suppressing anything at all?
I don’t have the answers to these questions but they are questions I would like everyone to start contemplating.

You’ve heard it said, ‘When in Rome, behave like the Romans’…but what if you just don’t know how. My suggestion is this, when in Rome, be aware of the Roman culture and juxtapose it with yours, pick up the good parts and leave the rest. As for the Romans, be mindful to consider those internationals amongst you, try to carry them along and if they are willing, trade secrets about each others cultures. At the end of the day, if we do that with an open mind; we are all more likely to come out as more rounded individuals- part of a global village that is rich in diversity and beautiful because it embodies so many cultures living harmoniously together.

However, that is just my suggestion, the topic is very much open for debate. 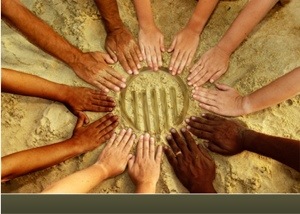